Skip to content Skip to main menu
Home › Event › Book of the Day: Daring Darleen Queen of the Screen 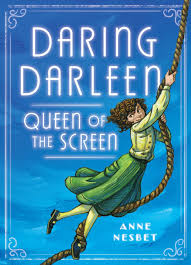 Lights! Camera! Kidnapping? In this adventure story, by Anne Nesbet, it’s 1914, and twelve-year-old Darleen Darling has the most exciting job in the world–she gets to dangle from cliffs and stop moving trains and soar through the sky in runaway balloons! Yes, that’s right: Darleen is a hero and a star–in the make believe world of the movies’. With her worried Papa, her studio, and the whole Darling family all depending on her, Darleen has to make the world believe in her stunts and film tricks while trying to keep her own feet (as the family saying goes) firmly on the ground. But Darleen’s fictional adventures collide with reality when a fake kidnapping intended as a publicity stunt becomes all too real. Now she is in the hands of the dastardly criminals who have just nabbed the famous young heiress Miss Victorine Berryman. With their lives at stake, can Darleen become the daring heroine she’s long pretended to be on film.