Skip to content Skip to main menu
Home › Event › Book of the Day: Houdini and Me 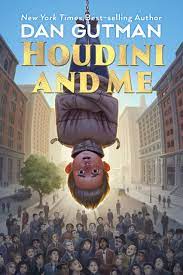 In this new book by Dan Gutman, eleven-year-old Harry Mancini is not Harry Houdini, the famous escape artist who died in 1926. but Harry does live in Houdini’s old New York city home, and he definitely knows everything there is to know about Houdini’s life. what is he supposed to do, then, when someone starts texting him claiming that they’re Houdini, communicating from beyond the grave? Respond, of course.
It’s hard for Harry to believe that Houdini is really contacting him, but this Houdini texts the secrets to all of the escape tricks the dead Houdini used to do. What’s more, Houdini’s offering Harry a chance to go back in time and experience it for himself. Should Harry ignore what must be a hoax? Or should he give it a try and take Houdini up on this death-defying offer? But what if Houdini wants more than just friendship with Harry? What if he actually wants to change places with him…and leave Harry trapped in 1921?