Skip to content Skip to main menu
Home › Event › Book of the Day: One Jar of Magic 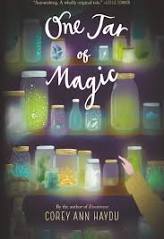 Rose Alice Anders is Little Luck. Lucky to be born into the Anders family. Lucky to be just as special, just as magical, as the most revered man in town–her father. It feels like the whole town has been waiting for Rose to turn twelve, when she can join the town in their annual capturing of magic on New Year’s Day and become the person she was always meant to be.  But when the special day finally comes, Rose doesn’t capture the powerful magic. Or the most interesting magic. She barely captures one tiny jar of magic. So while everyone else celebrates their armfuls of jars, Rose has just the one jar–the least anyone has ever seen. Rose’s dad won’t talk to her anymore and her friendships have gotten all twisted and wrong, but Rose is hearing whispers abut people who aren’t meant for magic at all, and maybe that’s where she really belongs. Maybe if she’s away from all the jars of magic, and from her dad telling her who she’s meant to be, who she has to be, Rose can begin to piece together what’s truly real in a world of magic.