Skip to content Skip to main menu
Home › Event › Book of the Day: Race to the Bottom of the Earth: Surviving Antarctica 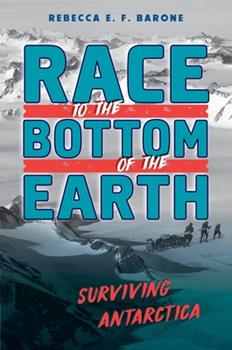 In 1910, Captain Robert Scott prepared his crew for a trip that no one had ever completed: a journey to the South Pole. He vowed to get there any way he could, even if it meant looking death in the eye. Then, no long before he set out, another intrepid explorer, Roald Amundsen, set his sights on the same goal. Suddenly two teams were vying to be the first to make history–what was to be an expedition of discovery had become a perilous race.
More than a century later, in 2018, Captain Louis Rudd readied himself for a similarly grueling task: the first unaided, unsupported solo crossing of Antarctica. Little de he know that athlete Colin O’Brady was training for the same trek–and he was determined to beat Louis to the finish line. Chronicling four explorers who were willing to risk their lives in the hopes of making history, this gripping account of adventure and competition is perfect for budding scientists, survivalists, and thrill seekers.