Skip to content Skip to main menu
Home › Event › Book of the Day: Smelly Kelly and his Super Senses 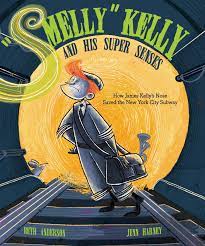 James Kelly smelled everything. Rats in the shed. Circus elephants a mile away. Tomorrow’s rain. His sense of smell was extraordinary. But what good was a powerful nose? How could his super sniffer make him special? In the New York City subway, James found his calling–and earned the nickname “Smelly” Kelly. Armed with his super sniffer and the tools he invented, he tracked down leaks from the dangerous to the disgusting, from the comical to the bizarre. Then, he sprang into action to prevent cave-ins and explosions in the tunnels beneath the city. Smelly Kelly not only hunted leaks but also saved lives–and he discovered the truly extraordinary power inside him.