Skip to content Skip to main menu
Home › Event › Book of the Day: The Monster Missions 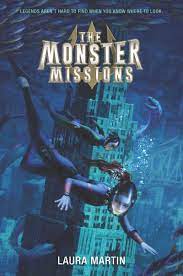 In this novel by Laura Martin, twelve year old Berkley has never seen land. since Tide Rising over fifty years ago, people have lived on ships. Berkley and her best friend, Garth, are divers, scouring the drowned cities on the the ocean floor for supplies. They never expected to find sea monsters. After Berkley accidentally awakens a Hydra, causing it to attack their ship, she and Garth are sent to live on the submarine Britannica, where the crew searches for and studies sea monsters. the terrifying creatures they track are the stuff of nightmares. but what haunts Berkley most is knowing that the Hydra she awakened will hold a grudge until it destroys her ship, and her family will down with it. Berkley must come up with a plan, but sea monsters aren’t the only dangerous creatures lurking in the ocean’s depths.