The Development of the Morris Choral Society 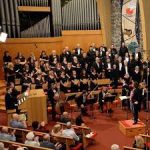 Join us as Wayne Walters describes the interesting history of the Morris Choral Society, the ensemble he led for 40 of its 43 years and for which he also came back to lead a special concert in 2021 at the Morristown United Methodist Church.

According to the MorristownGreen.com, the Morris Choral Society has an interesting founding. When a fire raged in the United Methodist Church in 1972, the Methodist congregation held its services in the sanctuary of Temple B’nai Or. In appreciation, Walters, the bass soloist at both the Methodist Church and at Temple B’nai Or, composed a Friday evening service and dedicated it to the B’nai Or congregation, where a chorus of area church choir members was assembled to perform. That performance was hugely popular. The following spring, the group re-assambled for a concert of Russian and Israeli folk music to honor the 25th anniversary of the State of Israel. The group then remained together under Mr. Walters’ leadership, and the Morris Choral Society was incorporated in the summer of 1973.

Walters, a Wilkes Barre, Penn. native, was an all-state singer in his high school chorus and went on to attend Wilkes College, the Julliard School of Music and Trenton State University for music. He had a long tenure teaching at the Morristown High School, received the Governor’s Award for Excellence in Arts Education and was recognized as an “Outstanding Professional in the Arts” by Morris Arts.
This event will be held in the Lower Level Meeting Room.